In League With the World

You’ve got to allow for style, though. Nothing arrives on paper as it started, and so much arrives that never started at all. To write is always to rave a little.
-Elizabeth Bowen, The Death of the Heart (8) 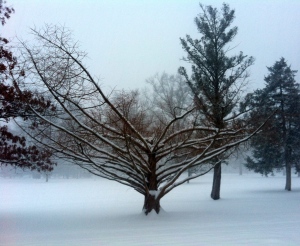 Divided into three parts: The World, The Flesh and The Devil, Death of the Heart is remarkable book . A society drama in the vein of Edith Wharton, the story centers itself cleverly on the journal of the young and innocent Portia.

Having just lost her father, quickly followed by her mother, the sixteen year old, Portia, goes to London to live with her half-brother, Thomas, and his wife, Anna (also, the brother’s life long housekeeper, Matchett). Portia and Thomas’s father had made the unforgivable social faux pas of falling deeply in love with a woman other than his wife. When the other woman became pregnant, Thomas’s mother stoically and sacrificially insists that he marry the soon-to-be mother of Portia, thereby more or less exiling the indecorous (if happy) family to wander Europe until their ends.

“Sacrificers,” said Matchett “are not the ones to pity. The ones to pity are those that they sacrifice. Oh,  the sacrificers, they get it both ways. A person knows themselves what they’re able to do without.” (92)

Anna and Thomas are unhappily married to each other in that smooth cold manner that society generally facilitates so neatly. Anna suffered a serious heartbreak earlier in her life, which is never fully explained, but which warps and poisons her feelings towards Portia. Her heart, and its death, cast Portia’s innocence into a guileless search trying to make sense of the people around her.

In this [Daphne] was unlike Anna, who at a moment of tension let out oaths and obscenities with a helpless delicate air. Where Anna, for instance, would call a person a bitch, Daphne would call the person an old cat. Daphne’s person was sexy, her conversation irreproachably chaste. (188)

So delicious! I love the observations and keen insight Bowen displays – which is cleverly self-referenced in all the talk about keeping a journal. The act of Portia writing down her innocent, and therefore, perspicuous observations is taken as a near act of war. This novel was published in 1938, but the attention to female dispositions and attitudes is notable. Bowen’s descriptions of the various types of women that populate this novel are wonderful, down to the details of how they approach food, one “making a plunge for the marmalade,” (185) or some other fantastically illustrative sketch.

“If you were half as heartless as you make out, you would be an appallingly boring woman.” (318)

When the novel reaches its crisis it is Anna who while answering how she would feel if she were Portia, calls out the crux of the book. The cruel, crushing, corruption of one’s heart by societal mores….and for what?

“Boredom, oh such boredom, with a sort of secret society about nothing, keeping on making little signs to each other. Utter lack of desire to know what it is about. Wish that someone would blow a whistle and make the whole thing stop. Wish to have my own innings. Contempt for married people, keeping on playing up. Contempt for unmarried people, looking cautiously and touchy. Frantic, frantic desire to be handled with feeling…”

To be handled with feeling…because the alternative, as the character of Anna proves, is certain death to the thing we most dearly cherish: our hearts.

*title from page 385: “Happy that few of us are aware of the world until we are already in league with it.”

3 responses to “In League With the World”