If it were true that sovereignty and freedom are the same, then indeed no man could be free, because sovereignty, the ideal of uncompromising self-sufficiency and mastership, is contradictory to the very condition of plurality. No man can be sovereign because not one man, but men, inhabit the earth
—Hannah Arendt, The Human Condition (234) 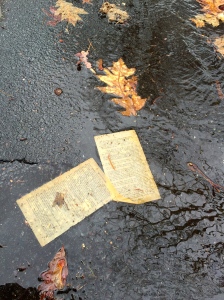 I took my twelve-year-old son to a college lecture last week called Creatures Who Create: Should We Bring Back Lost Species? given by Bruce Jennings the Director of Bioethics For Humans and Nature. He began the talk with a quote from Hannah Arendt. As it turns out it was from her book The Human Condition—a book that has been on what I call my “bbq” (beckoning books queue) for over a year. So it seemed time to read it.

Divided into five major parts: The Public and Private Realm, Labor, Work, Action, and The Vita Activa and the Modern Age, Arendt gives a deeply thoughtful and historical account of the permeating modern angst of alienation. I could hardly do it justice to it in this format—even pulling quotes seems a bit violent to the content. Overwhelmingly, though, I feel that quickening— my perspective, my ability to contemplate the nature of our “condition” has been cracked open that much more. An intellectual expansion brought about by respect for her method of inquiry, as well her sensitivity to her subject.

Man cannot be free if he does not know that he is subject to necessity, because his freedom is always won in his never wholly successful attempts to liberate himself from necessity (121).

This false expectation of ever being free of labor which is a necessary child of necessity is key to Arendt’s thesis and a fascinating entré into how work differs from labor and ultimately how labor has been subsumed in our culture into a cult of productivity instead of a healthier recognition of  labor’s true status as a cycle, an unceasing necessity, as well as an appreciation of product-less work which has a permanence and immortality which humans need to feel connected to life.

Works of art are the most intensely worldly of all tangible things[…] they are not subject to the use of living creatures, a use which, indeed […] can only destroy them. […] It is as though worldly stability had become transparent in the permanence of art, so that a premonition of immortality, not the immortality of the soul or life but of something immortal achieved by mortal hands, has become tangibly present, to shine and to be seen, to sound and to be heard, to speak and to be read” (167-8).

There is so much in the book my head is still in a stupor of reader’s gluttony. When my son and I left the lecture I asked him what he thought of it. Being a little contrarian, he said he had understood nothing. But as we discussed the topic I pointed out to him that his opinion of the matter aligned very nicely with what the speaker had presented. Yes, he was forced to admit, he had understood and thought about plenty. I told him even if 40 minutes of the 60 minute lecture was impenetrable to him I was not concerned, boredom is a good and profitable condition as far as intellectual and creative stimulation are concerned, and the 20 minutes that sunk in gave us an evening’s worth of contemplation together, and lifetime’s worth individually.

As Arendt points out, all action stems from contemplation and the lack of contemplation when considering actions which inevitably, indeed— ALWAYS have unforeseen consequences  is a vastly underused skill in our culture. We are all thrown into this world and we must, and can, forgive the others thrown-in before us for their actions which led to what looks like an environmental catastrophe in the making. That does not mean that we should withdraw into isolation, or give up on the only thing that gives our lives meaning—each other. We must profoundly, prudently, and compassionately contemplate the decisions that we make which impact our selves (which is always a plurality), our planetary cohabitants, and our world. And then we must act.