To find  trees where there are none, or something where it shouldn’t be, such as a hat off a head in one shot but on again in the next, are, as it were, cracks in the wall through which poetry can penetrate. Those who notice such spelling mistakes are the real illiterates and cannot be moved by fantasy anyhow. Such details have no importance.
—Jean Cocteau, Diary of a Film (50). 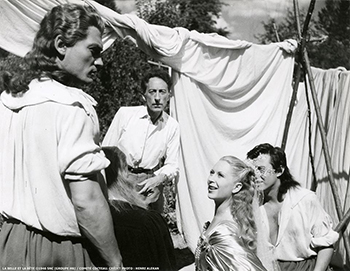 Still from the filming of La Belle et La Bête.

Jean Cocteau’s book Diary of a Film is a lovely little look into the process of making a film. His diary documents the making of the 1946 film La Belle et La Bête. A friend had wanted me to read the book, so I decided I’d better see the film first. The film is fabulous. Not just fabulous as in ‘wonderful,’ but, as my desktop dictionary gives the etymology: Latin fabulosus ‘celebrated in fable,’ from fabula. It is both kinds of fabulous. The artistic conception of the sets and costumes are a wonder, and the earnestness with which the earnest tale is told is nearly flawless (there was one scene which caused an outburst of mocking laughter in me, but I didn’t mind, and in fact enjoyed, the hearty laugh).

But for all that, I’d be mad if I forgot that bad luck has always run through  my life, and that it always has been and always will be, a sheer struggle (77).

“Bad luck” is a serious understatement. Never mind the post-war equipment problems and chronic “current” spasms (in my translation when there was a power outage it was said that they lost ‘current’—and that was pretty much daily). No—it was health issues that seriously beset Cocteau and crew. The leading man suffered boils, the leading woman—feverish illnesses, co-stars—various maladies including a fractured hip, and Cocteau…oh dear man—carbuncles, shingles, fevers, face rashes, eczema, and then this gem on page 189: “Have got jaundice. Yes, that was about all that was missing!” It’s a medical miracle they finished the project. Meanwhile:

Nuremberg trial. The two-and two-make-four’s are judging the two-and-two-make-five’s or even twenty-two (158).

Cocteau is a marvel of succinct truth and he is eminently quotable. Does the above quote not perfectly describe many of our current politician’s logic? And yet….This past summer I bought a wonderful book (it’s a rare occurance for me to actually purchase a book as I neither have room to house books nor discretionary money to spare—but, je ne regrette rien). I haven’t finished it, but this is why I bought it—I knew I would want to take my time with it. (It is in alphabetical order—I’m up to the F’s.) Written by Clive James, Cultural Amnesia is a series of essays (over one hundred) on the heros, villains, and fascinating figures of the twentieth century. Cocteau naturally rates.  And yet, while more than acknowledging Cocteau’s artistic achievements, James, as is his style, does not give Cocteau a pass regarding his questionable forbearance regarding the Nazi occupation of France.

While not exactly despicable—nobody died because of him—his behavior was not admirable (James 131).

Cocteau did not merely stay silent, he was an “air-kissing” attendee of Nazi cocktail parties. I read this essay before I saw La Belle et La Bête and, of course before reading Diary of a Film, but I had to re-read it after the two because….oh man. People are complex and flawed, I know. And—I have children! and I know enough about the Nazi’s and their ilk to know that I can’t say for sure how I would behave—those folks don’t fuck around, they don’t simply murder you! no, they will murder your son, daughter and goldfish too—and that is terrifying. We can not be in Cocteau’s mind, we can not know what aspect of his life allowed or forced his recurring attendance at these Nazi fêtes. All we can know is that we hope we would not. And we hope we will never be faced with the prospect.

I went off to R. in despair of ever finding perfection that can survive its difficulties. It’s always just beyond one’s reach. Sometimes one can almost touch it. But something is lacking (Cocteau 86).

*Title from p. 57: “In films a trick shot is often much more convincing than the real thing, and besides, it gives reality some relief.”

3 responses to “Giving Reality a Relief”