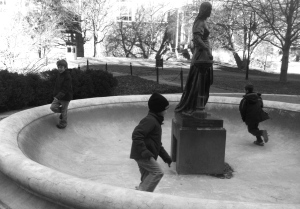 Rule number 14. Eschew Surplages. This comes, as is natural, after rule number 13. Use the right word, not its second cousin. The man is droll. Mark Twain’s essay Fenimore Copper’s Literary Offenses, found in A Subtreasury of American Humor outlines eighteen of the “nineteen rules governing literary art in the domain of romantic fiction- some say twenty-two” (519) of which he claims Cooper’s Deerslayer egregiously violates.

3. They require that the personage in a tale shall be alive, except in the case of corpses, and that always the reader shall be able to tell the corpses from the others. But this detail has often been overlooked in the Deerslayer tale (520 Twain).

Possibly one of the funniest scathing reviews I have ever read. And I say that as someone who liked the Deerslayer, in fact I read the whole series (many years ago) back to back. However, it is not as if Twain’s criticism doesn’t ring true – that’s what makes his ribbing so hilarious.

A favorite one was to make a moccasined person tread in the tracks of the moccaisined enemy, and thus hide his own trail. Cooper wore out barrels and barrels of moccasins in working that trick (521 Twain).

That Cooper gets the details wrong or does not attach himself to working out the engineering or logistical problems of his tales with any fidelity to logic drives Twain a bit nuts.

The difference between a Cooper Indian and the Indian that stands in front of the cigar-shop is not spacious. The scow episode is really a sublime burst of invention; but it does not thrill, because the inaccuracy of the details throws a sort of air of fictitiousness and general improbability over it (525 Twain).

I find myself drawn to humor writing this time of year. A semi-conscious attempt to thwart the faux-holiday cheer that does nothing but strengthen my cynical heart, crowding out that other kind of heart one wants to foster. No, better that I search for some genuine joy.  That is how I have found myself reading  A Sub-Treasury of American Humor  edited by E.B. and Katherine White. I made the near fatal error of starting with Dorothy Parker’s Glory in the Daytime– she is funny in a “Oh Christ, get me a cocktail to laugh my sorrows into” kind of way, and not really what I was going for. But, I couldn’t help myself, Miss Parker or, as I like to call her- Our Lady of Cynical Hearts, holds an abiding appeal as my patron saint…

Miss Noyes was full of depths and mystery, and she could talk with a cigarette still between her lips. She was always doing something difficult, like designing her own pajamas, or reading Proust, or modeling torsos in plasticine (75 Parker).

Let’s not even talk about how the story ends.

Mark Twain, in the Critic At Work section of the book is the sort of writing that will cause one to break out into laughter all day long as his barbs circulate through the brain.

A work of art? It has no invention; it has no order, system, sequence, or result; it has no life-likeness, no thrill, no stir, no seeming of reality […] its humor is pathetic; its pathos is funny; its conversations are – oh! indescribable; its love-scenes odious; its English a crime against the language.
Counting these out, what is left is Art. I think we must all admit that (530 Twain).