I have always been particularly attracted by happy lovers and attached to them: Lawrence and Frieda were more than twice as attractive to me together than they would have been separately.
—David Garnett, from the forward of Love among the Haystacks by D.H. Lawrence

The concluding book of my trip to Rome this summer was D.H. Lawrence’s Love among the Haystacks. I bought it in an English-language used book store in Trastevere. The book itself was appealing. A yellow paperback of old thick paper stock. It was published by Phoenix Public Co Ltd out of Berne and on the bottom of the front cover was printed, “not to be introduced into the British Empire or the U.S.A.,” which I read on the tarmac of JFK, so maybe not technically U.S.A.?

During my time in Rome I took many photos. I was alone after all, and through my lens I relished being the observer and used my photos to communicated to my friends at home. When I read the above quote in the forward of Lawrence’s charming book, I realized that I too have always been particularly attracted to happy lovers. The proof was there to see in my photos. 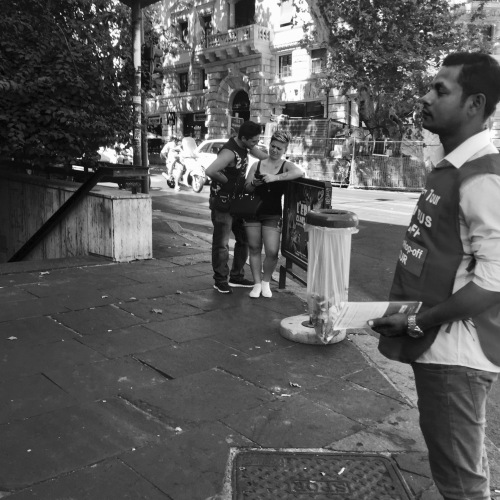 We were both still. She put her arms round her bright knee, and caressed it, lovingly, rather plaintively, with her mouth. The brilliant green dragons on her wrap seemed to be snarling at me (“Once” 173)

I had not thought I would get to this last book in my plastic bag, but events overtook me. We took off an hour late from Stockholm so landed at JFK at 9pm instead of 8:00. An hour before landing, the airline brought coffee and some packaged bread-like substance to wake us up. I was seated in the middle of the middle of the plane and when the steward reached over to put my coffee on my tray I had a moment of distraction and suddenly the cup was sliding down, off the tray, onto my lap. The hot coffee scalded my legs and I hopped (as much as one can hop while seated and pack like a sardine) and quietly (so as to not wake the baby sleeping in her mother’s arms next to me) cried out “oh! oh! oh!” But what could I do, really? I was trapped in my seat until everyone else was finished and had their trays cleared. So I sat in a literal hot mess for about 30 minutes.

There it was damp and dark and depressing. But one makes the best of things, when one sets out on foot (“A Chapel Among the Mountains,” 115).

Finally, I was able to get up and retrieve my bag. I went to the bathroom, changed my pants for a skirt, asked for a blanket to cover my wet seat and sat back down. It was at this point that I settled in with Lawrence. I thought I might just get a few pages in, but reading is my relaxation go-to. 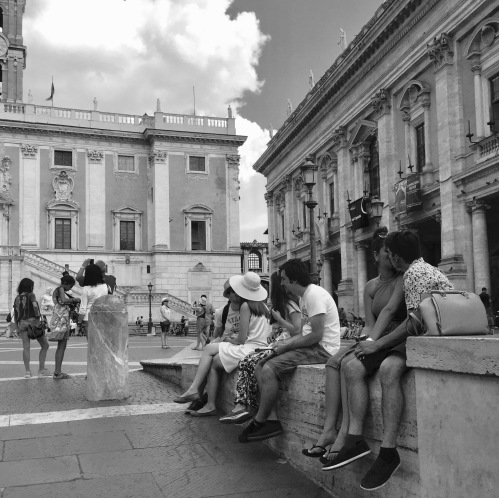 His lips met her temple. She slowly, deliberately turned her mouth to his, and with opened lips, met him in a kiss, his first love kiss (“Love among the Haystacks” 98)

I was very much mistaken however, because the night that I landed in JFK was the night that the terminals were shut down due to rumors of a shooter. We sat for hours on the tarmac before anyone even told us what was going on, although, as we all had half-dying cell phones we knew something was up.

The young woman looked at Geoffrey, and he at her. There was a sort of kinship between them. Both were at odds with the world. Geoffrey smiled satirically. She was too grave, too deeply incensed even to smile (“Love among the Haystacks 63).

I ended up reading the entire book. We sat in the plane for just under seven hours. Seven hours. Seven. Luckily, Love among the Haystacks is a collection of endearing love stories. Endearing, that is, in Lawrence’s usual strangled way. Lawrence’s lovers are never fully able to express the raging waters in and between them. Their attempt are often thwarted, frustrated, bitter, and even angry. But when the waters meet—it is sweet.