But silence is painful and terrifying only for those who have already said everything and who have nothing left to say; but to those who have not yet begun to talk, silence comes easily and simply. – Maxim Gorky, Twenty-Six Men And A Girl (210)

I dragged my Russian authors along on our annual camping trip. The Party by Anton Chekhov was an interesting contrast. Chekhov’s descriptions of the interior worlds of the painfully superficial and emotionally stunted bourgeoisie set alongside our chaotic, boisterous little group was amusing. While we are, some of us on occasion, at a certain…comfort level with emotionally stunted, the others try to help and,  painfully superficial has never been a danger in our midst. Some fifteen people, all of whom have their own struggles and hopes can at least find solace and encouragement sitting near one another next to the hearth discussing how to pronounce the word. And if that fails we can have fun arranging still-lifes: 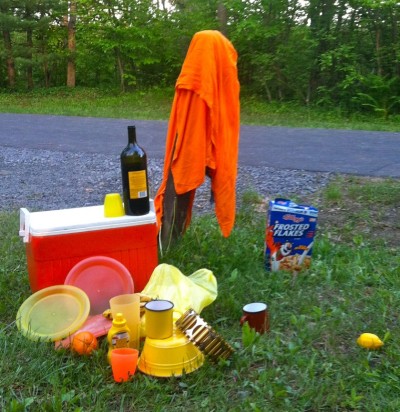 It seemed to her for some reason that if her husband were suddenly to turn facing her, and to say, ‘Olya, I am unhappy,’ she would cry or laugh, and she would be at ease. She fancied that her legs were aching and her body was uncomfortable all over because of the strain on her feelings. – The Party (198)

How many of us wear ourselves out binding our pride to our confusion and a looming monotony of meaninglessness that scares or deadens us? I was admittedly late to making this discovery, but I am happier when I can say if I’m not. Just let me feel. Let me feel it. The demons in my head are dispelled, and then there is happiness, lurking on a cool path through the woods, in one of our children’s laughter, competitive four-square, rushing waterfalls, bags of ice, blackened marshmallows, the history of cinema, no money or shoes, forgotten tent poles, a starry night, copious amounts of quinoa salad and the color orange. It’s all there.

Life for those whose circumstances never change is agonizing and very difficult: the longer they live, the more agonizing such circumstances become, if their spirits are not broken altogether.  – Twenty Six Men and a Girl (213)

Our spirits are not broken. Throw the comfort of a soft bed, clean clothes, and dry bathroom floors aside- these new circumstances in good company are a sweet succor to me. It’s all here. Don’t let happiness pass you by.

Nevertheless, it is well to have the means at our disposal of introducing these minutiae without any additional trouble, for they will sometimes be found to give an air of variety beyond expectation to the scene represented.
-William Henry Fox Talbot, The Pencil of Nature (from Plate 10)

I wrote a paper for a class recently, and although I apparently went off subject (fancy that!) I did get a wonderful book recommendation out of it. I had understood the assignment to be asking for a comparison of four works of art from the rather vast period around Impressionism, Post-impressionism, ism and isms and so on, (the ambitiousness of survey courses are a marvel- either that or a sickness). My paper had less to do with terms like Romanticism and Sublime than it did with what I saw as the influence of the development of photography on painting. When she returned my paper, my professor suggested that I might be interested in reading The Pencil of Nature.

The chief object of the present work is to place on record some of the early beginnings of a new art, before the period, which we trust is approaching, of its being brought to maturity by the aid of British talent. (Plate VI)

That is all. Everything that is wonderful, interesting, and funny about this book is found in that sentence. First a brief primer if you are unfamiliar with what is considered the world of photography’s Gutenberg Bible:

This book is the first ever that used photographic prints. Talbot worked for many years to develop, or rather improve what the Camera Obscura promised. He wanted very much to be able to record the lakes of Como, but had to acknowledge his lack of artistic talent that was required to faithfully render a scene- even the less daunting amount of skill which the Camera Obscura could sublimate was lost in his hand. As is often the case other people around the world were hard at work on this problem as well, and when M. Daguerre made his famed announcement in 1839, Mr. Talbot was seriously put out. But! Wait! the esteemed M. Daguerre had not described his method, so in furious haste to save the reputation of mother England!! Talbot published his method (which differed from the Daguerreotype) and thereby save the false sense of superiority that nationalistic hubris so generously dispenses. This national pride business is all very charming- right up until the moment people start getting killed- “aid of British talent,” indeed! but I digress-

Accompanying his Plate III, Articles of China, is this most pragmatic observation:

And should a thief afterwards purloin the treasures- if the mute testimony of the picture were to be produced against him in court- it would certainly be evidence of a novel kind; but what the judge and jury might say to it, is a matter which I leave to the speculation of those who possess legal acumen.

I find his earnest insistence on the practical applications of photography to be very endearing. His description of his learning process is as fascinating as it is truly impressive: that this period in time was a fecundity of inquiry, experiment and discovery by what today would be considered laymen is wonderful. It seems to have been a time when people simply found the world to be fascination, and the whys and hows were somewhat within their reach. Their invigorating spirit still has the power to inspire.

In my first account of “The Art of Photogenic Drawing,” read to the Royal Society in January, 1839, I mentioned this building as being the first “that was ever yet known to have drawn its own picture.” (Plate XV)

“Drawn its own picture,” that is the primary reason why this book remains a delight. Try as he might to promote his English sense of pragmatism, Talbot has an immediate and innate sense that what is really occurring with the development of this new device is – Art. That which the artist brings to the equipment is increased by what the equipment brings to the paper- despite its practical uses, that pencil of nature remains in the domain of mystery, discovery, serendipity, thoughtfulness, and creativity that is “beyond expectation.”

As an art form photography endures, taking its place in the “Genius of Repose” which Talbot ascribes to Oxford in the summer season, but which I would say is really the the breath of beauty that art holds, even for a moment, in sublime stillness.