Lives (Noble, or Not)

This narrative […] is suspected by some, because of its dramatic and fictitious appearance; but it would not wholly be disbelieved, if men would remember what a poet fortune sometimes shows herself
-Plutarch, Everybody’s Plutarch (21) Romulus 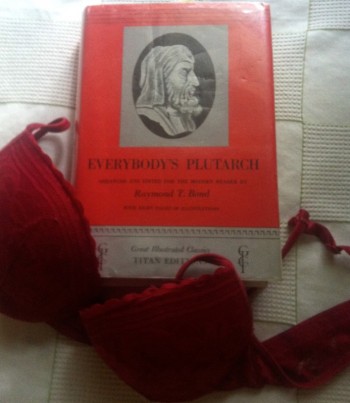 I am beginning  a potentially long term relationship with Plutarch, even the abridged versions demand commitment. The other day this thought traipsed through my head- “I have to go buy a bra and then I’ll read more Plutarch.” I had to pause a moment to take in the unique ridiculousness of that sentence. In the end I didn’t get a bra- it would only bring me pleasure and there was a small rug for about the same money that would bring my children untold pleasure to sit upon as they served almost two years in a house full of animals that made proximity to the floor an extremely negative experience. But, I digress.

Herodotus says, that, requiring money of those of the island of Andros, [Themistocles] told them that he had brought with him two goddesses, Persuasion and Force; and they answered him that they had also two great goddesses, which prohibited them from giving him any money, Poverty and Impossibility. – (121) Themistocles

Those goddesses sure do get around. Boy, I miss Herodotus, but, Plutarch knows a hilarious retort when he sees one. His reports on the lives of noble Greeks and Romans are fascinating because he spends much more time, then seems to be the norm for the time, discussing the personalities, ideas, and feelings that may have contributed to the “nobleness” of these men. Of course there are no noble women, if you’re a woman and you can get yourself upgraded from harlot to mistress- consider that a boon. Actually, scratch that, if you find yourself a mistress instead of a harlot, thank Salon. Plutarch tells us that Salon is the founding father of what psychologists now refer to as “re-framing.”

[Salon] was afterwards asked if he had left the Athenians the best laws that could be given, he relied, “The best they could receive.” The way which, the moderns say, the Athenians have of softening the badness of a thing, by ingeniously giving it some pretty and innocent appellation. (74) Salon

“Softening the badness.” I quite like that. Salon seemed to be thoroughly  smart and articulate. He was a humanitarian that sought to codify good sense and a quality of life that is, sadly, enviable to this day. And he believed in love. He forbade dowries, and “would not have marriage contracted for gain or an estate, but for pure love, kind affection, and birth of children.” (78)

An interesting point considering many an argument has been made, (and countered on this blog) claiming “romantic love” is a more recent invention. But I never gloat.

It is shocking (I even feel embarrassed on behalf of these ancient writers and “nobles”) to have such prolific histories told with nary a mention of half the population, but this may be why there is even a quasi legitimate claim on the idea that romantic love is for the weaker sex, domestic life of no interest, daily dealings devoid of true insight. In absentia, the onus for proof, rather than being on common experience and common sense, is boiled down to written proofs- a bar that leaves women and illiterate cultures fighting to prove their worth.

But an internal battle between a bra and rug which is rife with all the dimensions of real life- finances, sexuality, maternal urges, hierarchy of needs, materialism, and utilitarianism are eternal battles wage by all. Okay, fine, maybe just me. Then again, when I told a friend of mine that I was simultaneously contemplating Plutarch and bras, he sent me this quote:

“The brassiere is not a vessel to be filled, but a fire to be kindled.”- Plutarch

And this is why Plutarch remains so readable, he does actually touch upon the personal, even if it is with the barest whisper, he takes history out of the strictly martial arena and speaks to what really makes a man noble- his passion and his humanity.