Snowdie grieved for him, but the decent way you’d grieve for the dead, more like, and nobody wanted to think, around her, that he treated her that way. But how long can you humor the humored? Well, always.
—Eudora Welty, “Showers of Gold” (1) 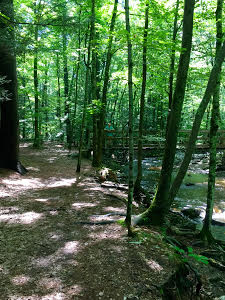 Tuesday I was standing in a packed NYC subway in alarmingly close intimacy with my fellow passengers, amazed at how well bodies fit into one another, reading a story about being in the woods (where I had been on Monday). I wrote of it to a friend of mine and he re-set my words into verse:

Subway
I was pressed up so tight against his backside
I only had to whisper in his ear,
“I am sorry, I am being pushed.”
But still I held my book above the fray
So that I could continue the story.

And what was this story that had me so enthralled with poetic devotion? A book of short stories, Golden Apples by Eudora Welty. The first story “Shower of Gold” is told with disarming charm by Miss Katie. I loved her no-nonsense ingenuousness. She told the story of Snowdie MacLain, an albino woman, whose husband would come and go without so much as a by your leave. Sometimes when he would come he’d let her know:

I guess I admire Miss Katie–she wants to know why. When her husband tells her he thinks that he saw the absconder husband, King MacLain, at a county parade she can’t believe he didn’t confirm much less confront him:

Men! I said if I’d been Governor Vardaman and spied King Maclain from Morgana marching in my parade as big as I was and no call for it, I’d have had the whole thing brought to a halt and called him to accounts. “Well, what good would it have done you?” my husband said. “A plenty,” I said.

yet, I think I understand Snowdie better. Welty enchants words, she’ll have you laughing out loud in a hot crowded subway, and then leave you a little lost on the platform of her phrasing musing over the devastating disappointments we endure. Some, like Snowdie, just take them quietly. I thought, after discussing the title of the story with another friend, that perhaps Ms. Welty, as fun and sharp as she made Miss Katie, saw things Snowdie’s way. That shower of gold was Snowdie’s news that she was expecting twins. Maybe she didn’t think she deserved more than a shower. Her husband just disappeared with no word or explanation and maybe she just took that as proof that she was just going to get what precipitation she did.  What good would it have done her to complain?

Each story in the book stands alone, and yet they are all set in the same fictional town, the same characters, the same disturbing inability to “know how to do about” as is Welty’s refrain in the story “June Recital.”

That’s the frightening thing. We are all trying so hard, but what if we just plum don’t know how to do about? I don’t mean algebra, or gardening, or spelling. I mean to say, when we don’t connect to one another when we, like Miss Eckhart, flail and fail in something so essential as love. When one looks into their own heart and has to admit–I don’t know how to do about you at all.

Both Miss Eckhart and Virgie Rainey were human beings terribly at large, roaming on the face of the earth. And there were others of them–human beings, roaming like lost beasts (“June Recital” 85).